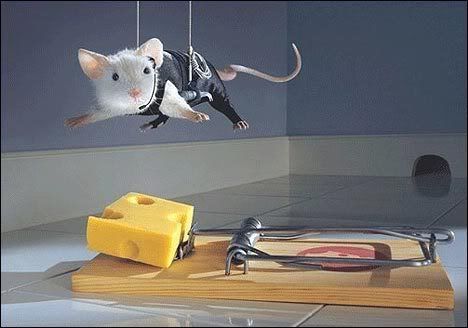 Oh, how I adore cheese.  You could melt it on a cardboard pizza top and I’d probably eat it.  These dishes are my favorite cheesy dishes at restaurants I’ve tried. 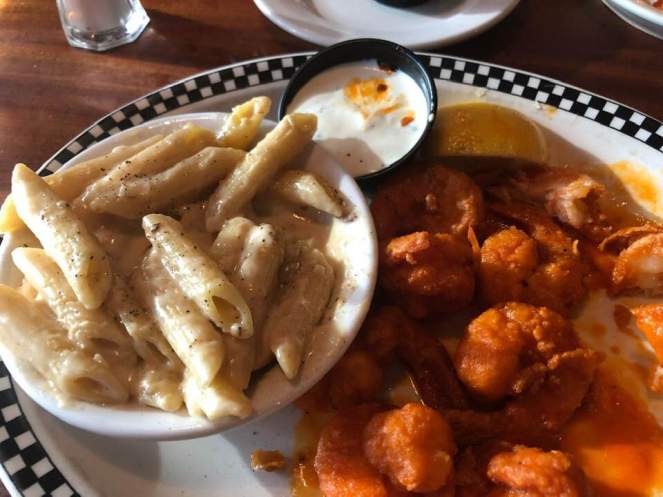 Smoked Gouda Mac and Cheese at Safari Miles in Denver 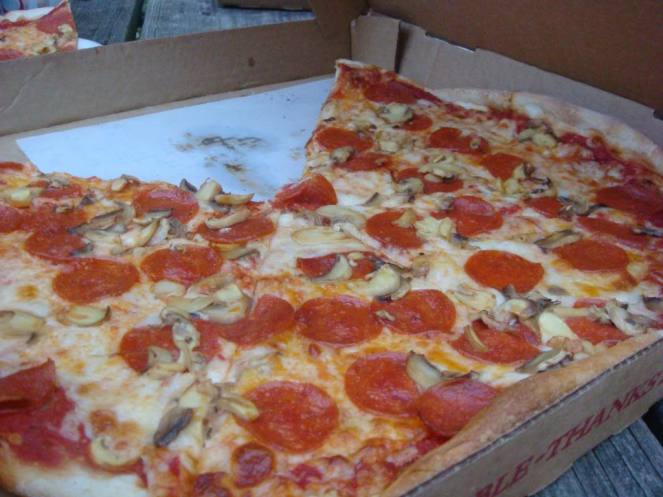 Pepperoni and Mushroom Pizza at Tony’s in Hickory, NC 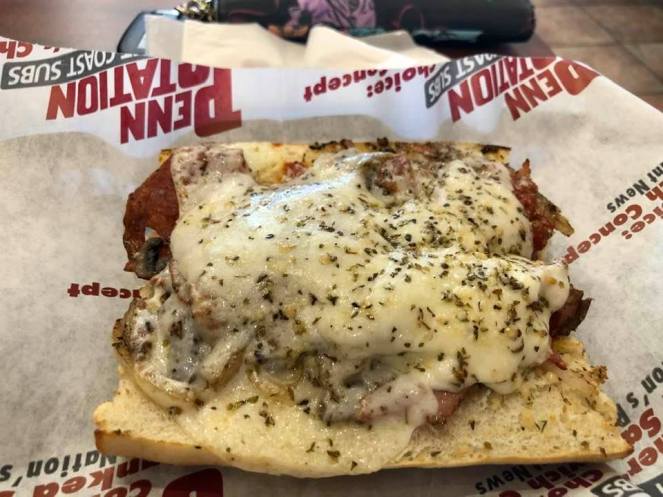 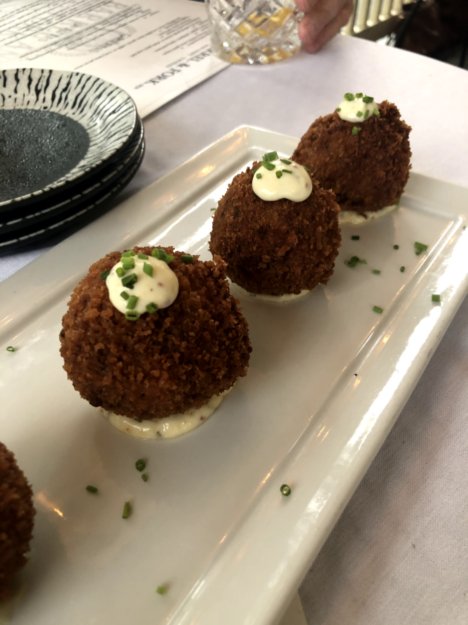 Arancini from Barrel and Fork in Cornelius

If you haven’t been to Rooster’s in a while, do yourself a favor and get over there.  We decided to go after a chef friend recommended it so highly.  She told us that the Executive Chef, Zack Renner, was amazing and that they served her farm’s pork.  That’s all she had to say, we were there.

We reserved a table for 8 so they put us in a room that looked like it might once have been the hallway of a small strip mall.  BUT they’d doctored it up with pretty twinkle lights and a nice fountain in the middle.  And then there was this adorable pig door holder we were all entranced with…and we weren’t alone.  A few people stopped to take pictures of Porky.

Our waitress was so kind and deftly handled our large(ish) group by giving us suggestions, fixing drinks when we weren’t satisfied and delivering the bad news about dessert.  The management also stopped by a time or two to make sure our night was going well..which it very much was.

Cocktails are the best way to begin Girl Nosh.  Rooster’s has a fine selection of wine, brews and mixed drinks.  This one (I forget the name) was muddled cucumbers, raspberry and gin.  I have to admit it wasn’t for me, but others at the table found it refreshing and light.

To soak up all of this alcohol, they brought us an assortment of delicious baked breads with olive oil and balsamic vinegar. The bread was hearty and delicious.  Very nutty.

Housemade bresaola.  I didn’t try, but doesn’t it look great?

The French Onion soup was not one of my favorite soups.  It was hearty, but not as flavorful as it should have been for such murky and dark broth.  I didn’t opt for it on my second visit.

The salads were all so fresh and dressed perfectly.  This one was on their daily offerings page, meaning it was what was fresh at the farmer’s market:  Whole romaine leaves topped with walnuts, tangerine slices and grated Pecorino Romano cheese.  Perfect.

The next salad was baby arugula, chopped pears and chevre cheese. Yum! 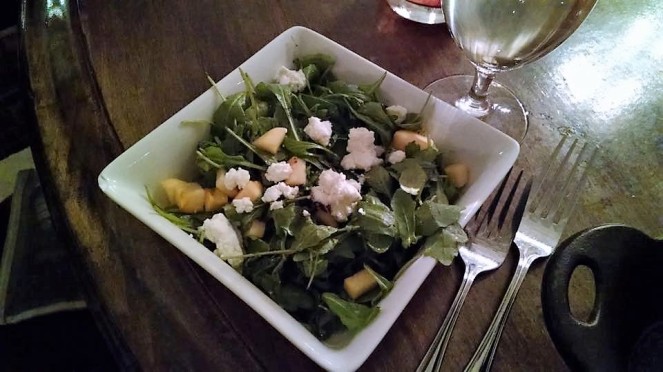 My salad was a wedge.  I don’t know why I’m not more adventurous.  I just love a wedge.  And this one was perfect.  The cold, crispy iceberg lettuce topped with creamy, tangy blue cheese dressing is a comfort food.  This one had some pickled red onions on top that were both sweet and tart, and really gave the salad a punch!

When you go to Rooster’s, you must have something that was wood-fired or wood-grilled.  Shannon got the salmon, and it was perfectly cooked…charred on the outside and tender on the inside.  She was so happy with her choice!

Other dishes I didn’t try but were reported to be delicious:  Wood-Fired Joyce Farms Natural Chicken.  Laurie said it was tender, full of flavor and really juicy.

Anessa got roasted veal with mushrooms and blue potatoes.  It sat in a deliciously flavored jus and drizzled with aioli.  Perfection. 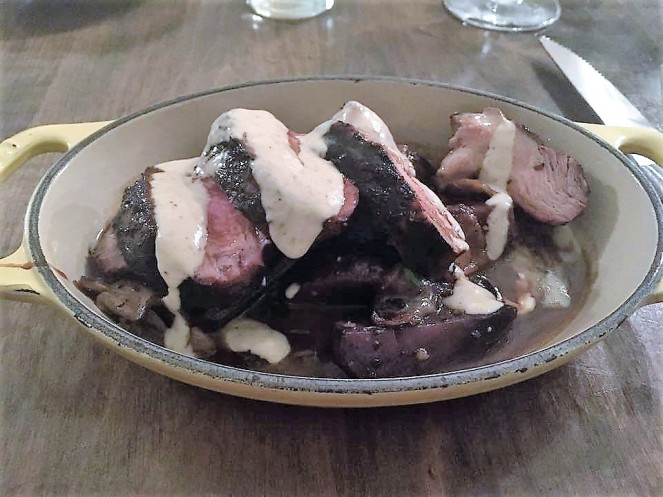 One of the best dishes for the night was Jennifer’s braised beef short rib.  Tender as a a slow-roasted pot roast, but packed with flavor.  The meat just melted in your mouth!

I have mixed feelings about my entree.  I got the fried oysters, and while they were perfectly delicious: crispy on the outside and creamy on the inside with a nice briny flavor, I’d come to a restaurant that has “wood-fired” in its name and didn’t get something from the grill.  Supremely stupid.  You can get oysters at a fish camp.  Stick with something with the taste of fire.

Have you ever seen a cheeseburger that looked this yummy?  And shoestring onion rings to accompany.  That’s not even fair. 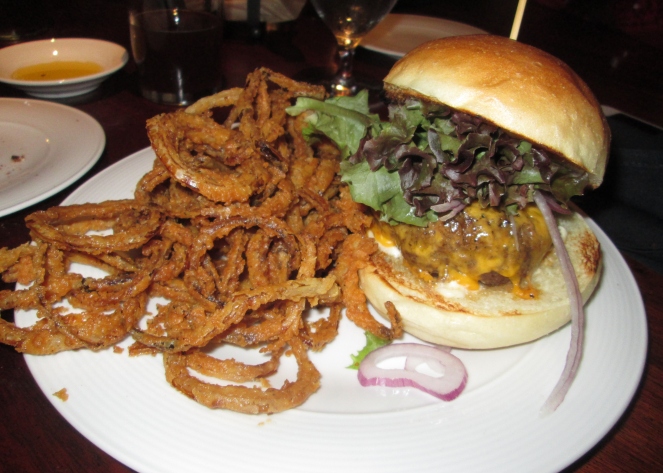 You know, sometimes side dishes are predictable or dialed in.  An afterthought.  At Rooster’s the sides are at center stage alongside the entrees.  All sides here are designed for two people, but are so good you may not want (or be able) to share.

The fried corn should be your first choice.  It’s real corn.  Not from a can.  And it is pan-fried with spices that make is lip-smacking good.

The stone ground grits are another perfect choice.  Little nuggets of corny goodness are buried in them and there is plenty of heavy cream to make them rich and velvety.

One of the best things I’ve ever put in my mouth was the wood-fired sunchoke.  It sure didn’t look like much more than a ginger root when it came to the table, but the taste was amazing.  When I saw the word “sunchoke” I immediately conjured images or the artichoke.  The sunchoke, however, is a tuber, like a potato.  It was creamy and had a little bit of sweetness to it.  The wood firing brought out a nuttiness in it as well.  Very complex for such a simple dish.  One of my favorites for the night!

Another favorite is this mess 🙂  This is a mix of mushrooms, which is probably one of my favorite foods in the world.  The table agreed that these were a favorite.  They were lightly seasoned and gently cooked, so their true flavors shown through. 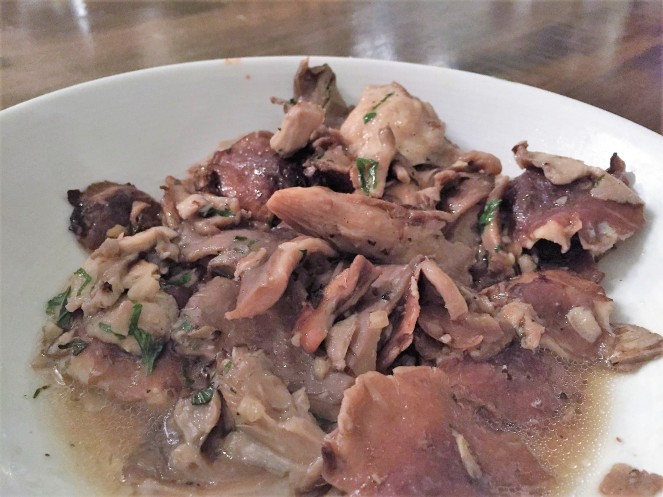 Macaroni and cheese: soupy and creamy…yum!! 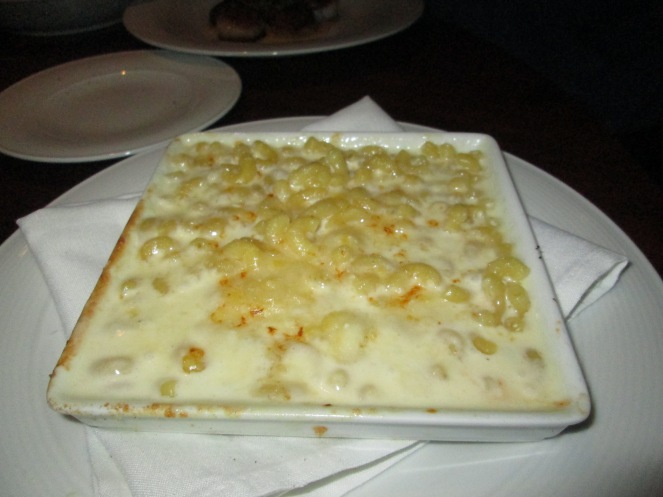 By the time we were done eating, most of the tables around us were empty.  And they’d take our top dessert choice with them: the coconut cake.  We didn’t let that stop us, though.  We all ordered the back up dessert which was an apple tarte.  The waitress called it something else, but for the life of me, I cannot remember what that was.  To describe it I’d say it was dried apples (re-hydrated, of course) placed atop a buttery and light croissant crust.  It was accompanied by a scoop of vanilla bean gelato and a spill of rich caramel sauce.  Even though apples aren’t my favorite dessert fruit, this reminded me of the fried pies my grandmother used to make.  The apples had a tart but sweet taste and were very soft.  The crust wasn’t overly sweet, so it was perfect with the gelato and the caramel.  Decadent and delicious! 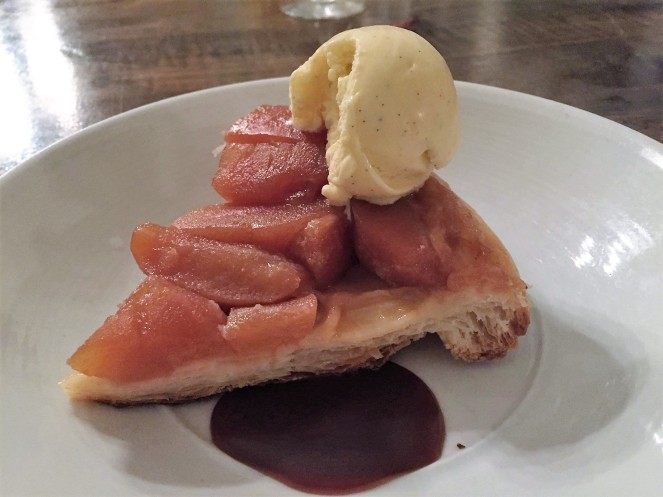 We at Girl Nosh all agreed that this was one of our favorite places we’d been to.  That’s saying something, because we’ve been to some fine restaurants.  You will need a reservation, but you can make them on OpenTable.com.  Go on and get that done now.  You are welcome.