Most of the fun places I get to go are as a result of some class trip. This one made me sad that I didn’t get to walk it before the wreck. I can’t tell you how truly beautiful this place was, and most of it I had to experience through these pictures, but that’s better than not experiencing it at all, huh?  We went in spring, so the flowers were blooming beautifully: 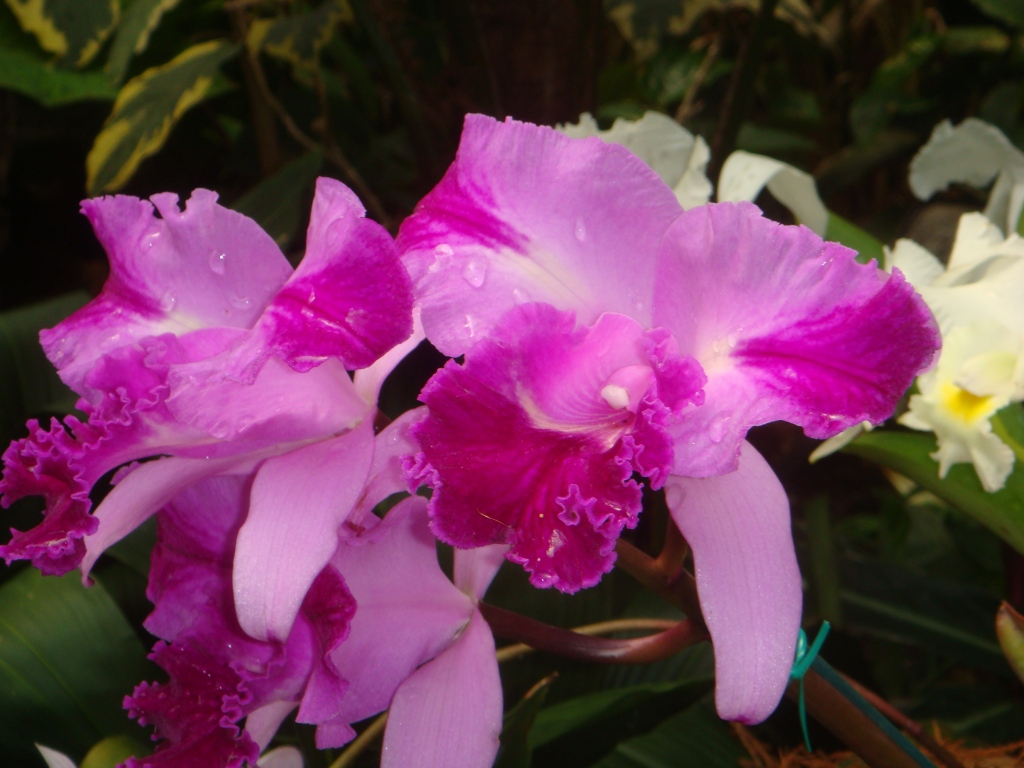 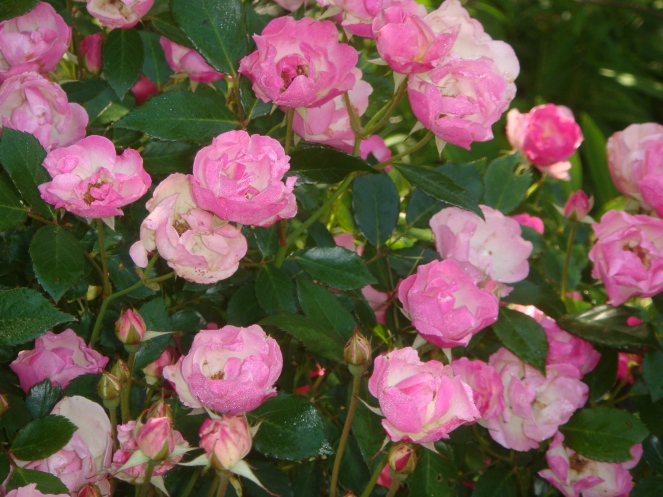 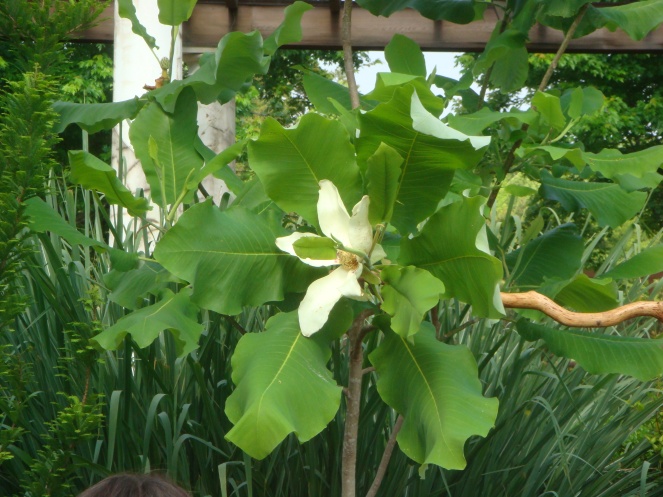 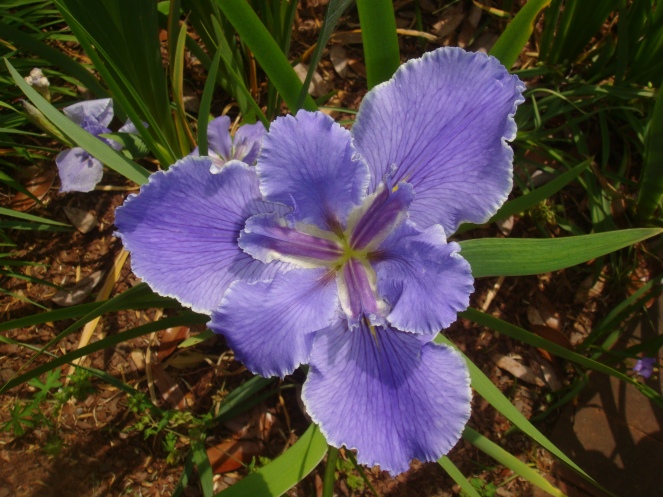 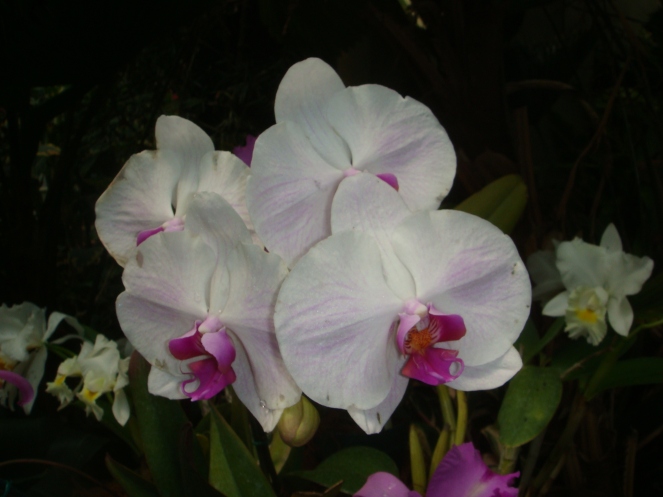 Here are some pictures from the grounds. It was really a beautiful and peaceful place. 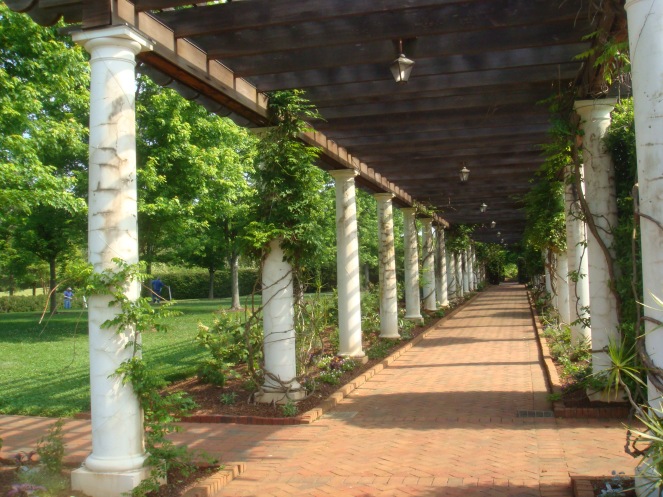 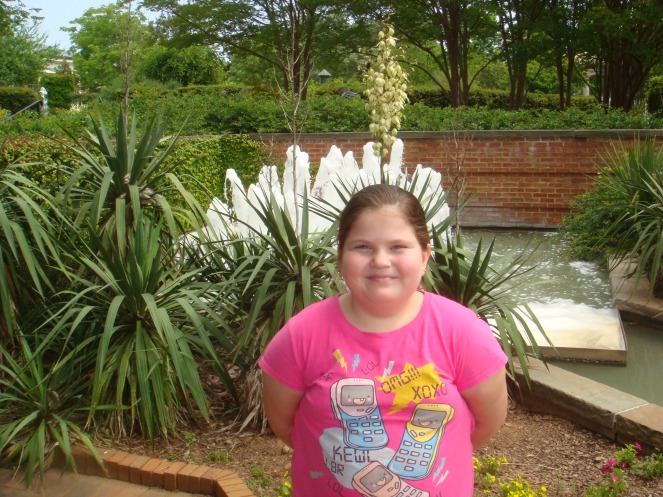 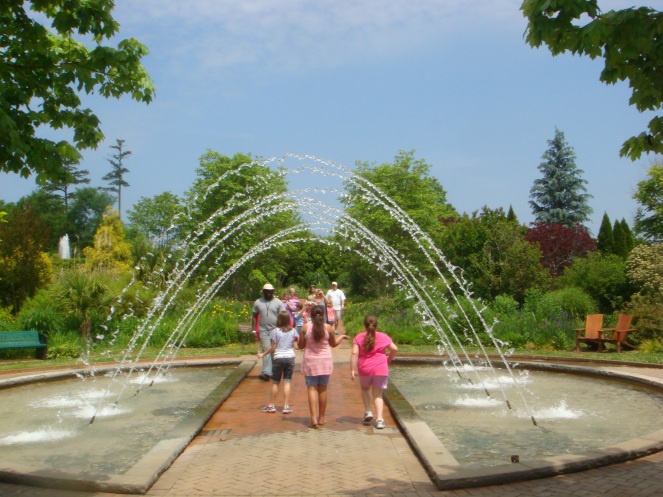 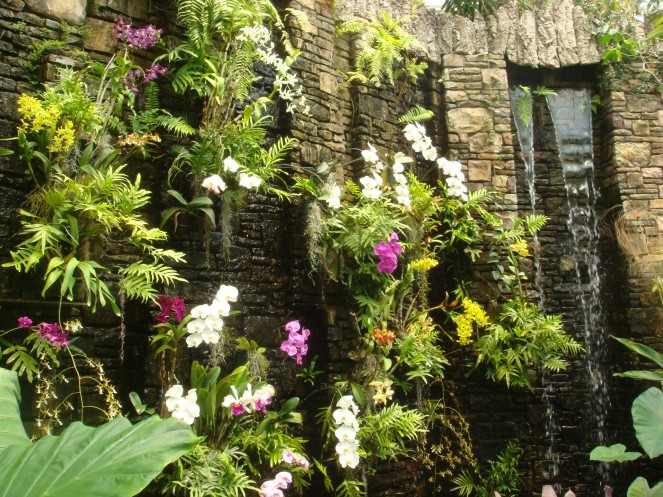 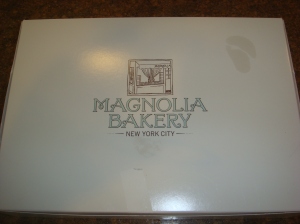 Hubby had to go to Jersey for business a month ago and wandered into NYC for the night.  God love him, he didn’t bring us home Hard Rock Cafe Tshirts, nor mini figurines of the Statue of Libery…he brought us cupcakes. From two famous eateries in New York City that I’ve only dreamed of visiting. This one I’m reviewing is Magnolia Bakery.   Now that is a good man. 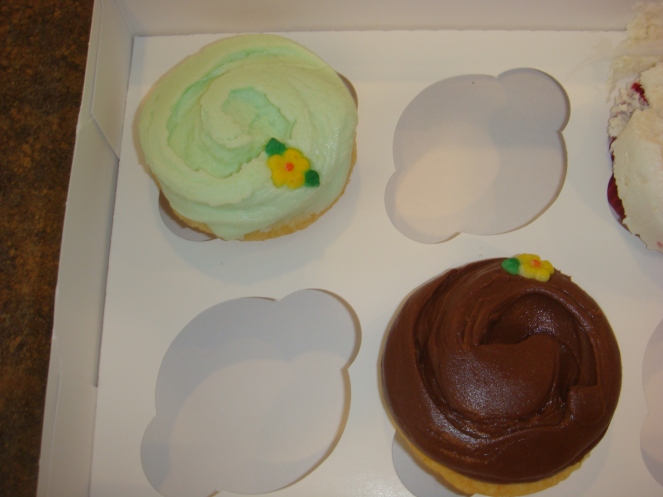 This store that had its humble beginnings as an old-fashioned coffee and bake shop in Greenwich Village has now expanded its number to eight.

My hubs brought back vanilla cake with vanilla buttercream and chocolate buttercream.  They were about $3 each, a steal.  This cake was moist yet dense and had just the right hint of vanilla bean.  The buttercream was purely sinful, made with real butter and just enough cocoa to make it chocolatey but not too much so.  I gave the vanilla on vanilla to my mom and sister and they declared it delectable as well.  Next time we visit NYC, I’m going to go out on a limb with some of their Specialty flavors! 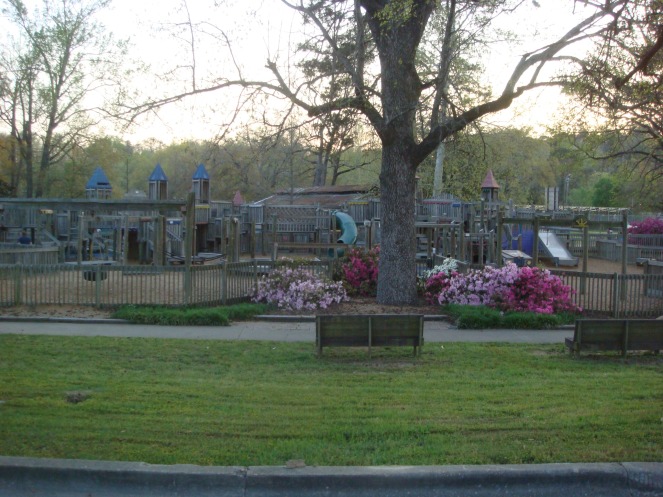 Much of my childhood was spent in Prattville, Alabama where all 4 grandparents lived.  My grandparents used to take me to the duck pond when I was little to feed the ducks and see the momma ducks sitting on their eggs.  I loved going! 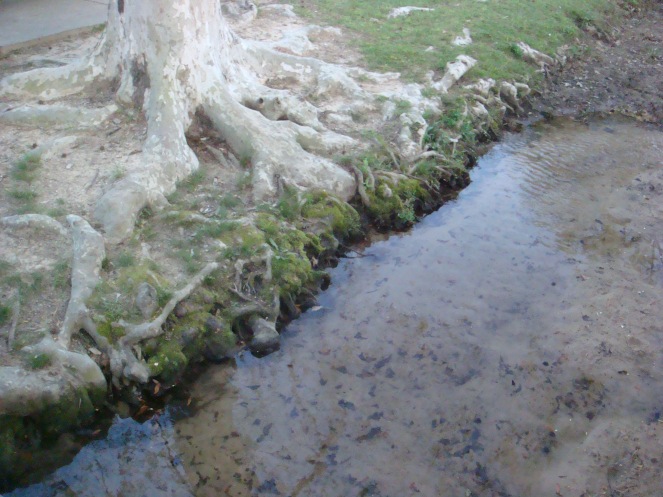 Though I’m lucky to have had my grandparents into my adulthood, my grandfather just passed away a month ago and we made the trek to attend his funeral.  The duck pond is still there, but they’ve added a huge playground facility that is really quite awesome!  My only complaint is that the mosquitoes breeding in all of that pond water and the stream that feeds it were a huge nuisance.

The park itself has quite a bit to offer.  There are plenty of spots for parents to rest their legs while their kids run around the playground.  There is also a covered picnic area where one family was having a reunion.  There is an Olympic sized swimming pool right next door that is as old as my mom (wow!) but still manages to pack in hot folks in the summer.

One of my favorite things to do is to walk just a ways down the street and visit the artesian well.  The water is clear and delicious, and I love the idea of an “artesian” well, though from what I can tell it really is just a pipe with constantly running water.  Still cool. 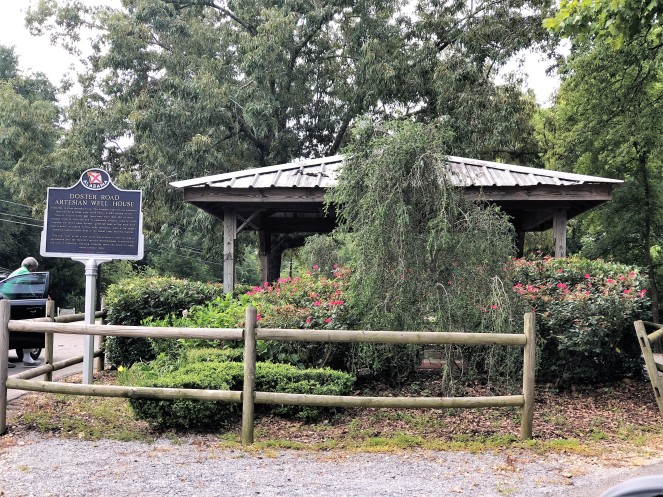 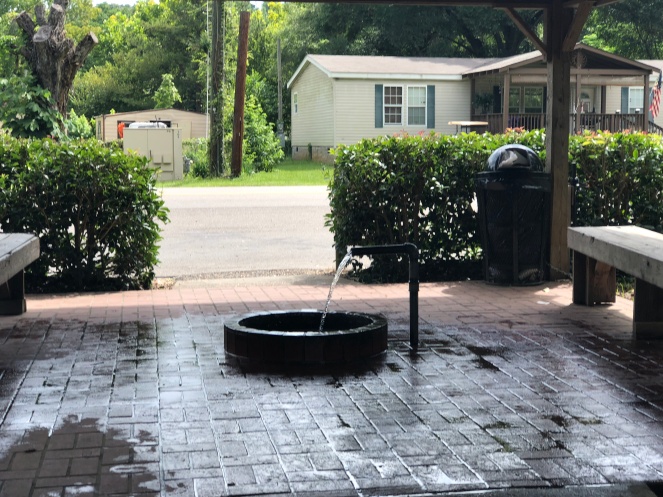 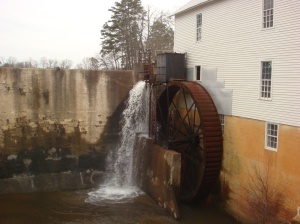 If you are looking for a pretty backdrop for family pictures, might I suggest this mill? While we were there, we saw a bridal session in progress. This picturesque setting is in Catawba County, on Balls Creek. The Mill itself, originally built in 1913, is still working, and can be toured for a mere $3.

There is also a cool little general store that sells the Mill’s wares and refreshments. I enjoyed the lovely porch swing out front.

If you have a free weekend, this is a nice little Saturday activity!

You can read up on its history here: Murray’s Mill

Wellll…we’ll file this under better late than never.  But come November/December, you’ll be glad this is here.  You can thank me then if you wanna, too.

I’ve been wanting to ride up to the moutains and cut my own Christmas tree for as long as I’ve lived here.  So, 11 short years later I got my chance.  I can’t believe I waited so long, it makes me sad, actually.

OK, so you go just past Boone a ways and you’ll see the signs guiding you to the magical RRR Tree Farm.  From there you park and take a wagon ride up the mountain to pick out your “still growing in the flipping ground” tree!  When you find the perfect tree, tag it and saw it.  Or, you know, they’ll saw it. Anyway, it’s about $50-70 for a normal-sized tree.  Here’s the best part…that tree stayed fresh until the day we took it down.  In fact, if I’m truthful, it’s *still* green in the backyard on February 9th.  I’ll never get my Christmas tree at a Walmart lot again.

It’s time once again for the annual Carolina Renaissance Festival.

Sooo much to see and do!

Games & Rides are pay as you play, and typically run between $1 and $5.

Entertainment: Crowds of costumed characters, jousting, arts and crafts demos, shows and food are just a few of the surprises that await you!

Jousting is one of our favorite shows!

Twig the Fairy is absolutely my daughter’s favorite character.  She told me tonight “when I see Twig, I’m going to run up to her and say ‘Do you remember me?  I was younger the last time you saw me.'”  You can follow Twig on Twitter, too!

You can buy nearly anything here that comes from the middle ages…My children prefer the shields/swords and fairy wings.

Ever heard of the Brown Mountain Lights?  The mysterious lights appear and

disappear, seeming to move over the ridge of Brown Mountain (in BurkeCounty, near Morganton).  The Brown Mountain Lights have been have been made famous by Cherokee legends dating back to the 1200s and by modern reports.  White settlers of the High Country reported seeing the lights throughout the 1700 and 1800s.  They were documented in print by the Charlotte Observer as early as 1913.

Western NC Attractions describes them as “…being a glowing ball of fire, to being a bursting skyrocket, or a pale almost white light. The fact that they never seem the same is as fantastic as the lights themselves. At times they seem to drift slowly, fading and brightening and at other times they seem to whirl like pinwheels, then dart rapidly away.”

There are many theories that try to explain the lights, but most are legends  or have been disproven.  The few that remain are explained by Western NC attractions: “Of the many scientific theories made to explain the Brown Mountain Lights, none have been proven. Some suggest that the lights are caused by a combination of several minerals and gases in the area. One geologist suggested that possibly deposits of radioactive uranium ore in the area may be responsible for producing the lights. Another suggests phosphorus, but this element oxidizes quickly and is not found here. Pitchblende Ore, from which radium is derived, has been mentioned, but the rays from radium are invisible.”

If you’d like to view the lights, try these spots:

We went to Cool Park today in Hickory and had such a blast! We have usually made the first visit here by now, but we took that trip to Disney right after school let out, so we delayed our first visit to almost July…unheard of in the Zick house! 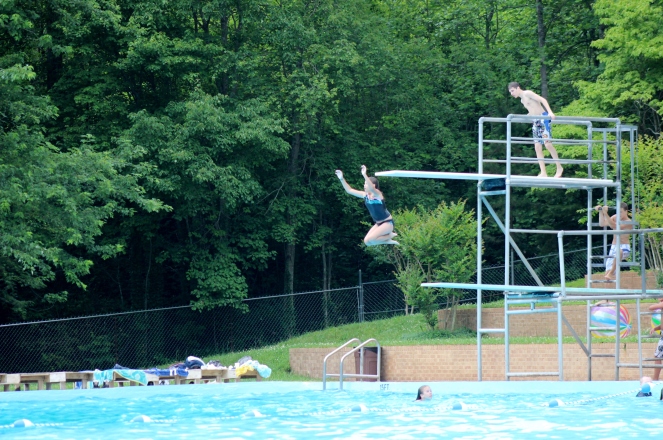 To get here, take StarTown Road all the way to Spings Rd. in Hickory. Take a right on Springs and a left on Kool Park Rd. Take a right at the first red light (by the church) and you’ll see the sign for Cool Park on the right. You can thank me later.

Some stats: It costs $12 for adults, $8 for kids, bring a picnic as there are plenty of picnic tables. No glass bottles, no alcohol. The lifeguards are quite lax and you can do pretty much what you want.

Cool Park is open daily from 10-6 pm. During the week you can go at 3pm and get in for 1/2 price. 3 hours of swimming is usually plenty for us. Going at this time also ensures that all of the daycare kids are gone by that time.

Now that spring is just around the corner, and we’ve been seeing some warmer temps, people are out walking for exercise and fun again!  We have the perfect trail in Lincoln County called the Marcia Cloninger Rail Trail.  It is perfect for walkers, joggers, strollers and cyclists!  The trail is lit and landscaped and it runs from Pine Street to Motz Avenue and is about a mile in length.  There is the hope that one day it will be expanded to the Ramsour’s Mill battle site.