Girl Nosh July was Standard Oyster Company.  We picked it because it is RESTAURANT WEEK and they were close.  And I think I’ve found a new favorite place.

The whole place is a bar.  But kind of upscale.  There are bar stools only!  So, if you have issues that might be effected by that, be aware.  Still, so cool.  The place was a little warm in there, but you know…it’s summer.  I admit though I was hot to the point of being miserable and the wait staff was sweating buckets.  Hopefully just an HVAC issue and not the way they normally keep it.

We all started with a cocktail, of course.  The best of the evening was this Bloody Beast.  That’s a kicked up Bloody Mary made with Tito’s Vodka and garnished with a couple of tiger shrimp, some bacon, olives, pickles and pickled okra and a lime.  Oh, and there was some light salt on the rim.  So so so delish!  Maybe the best Bloody Mary I’ve ever had. 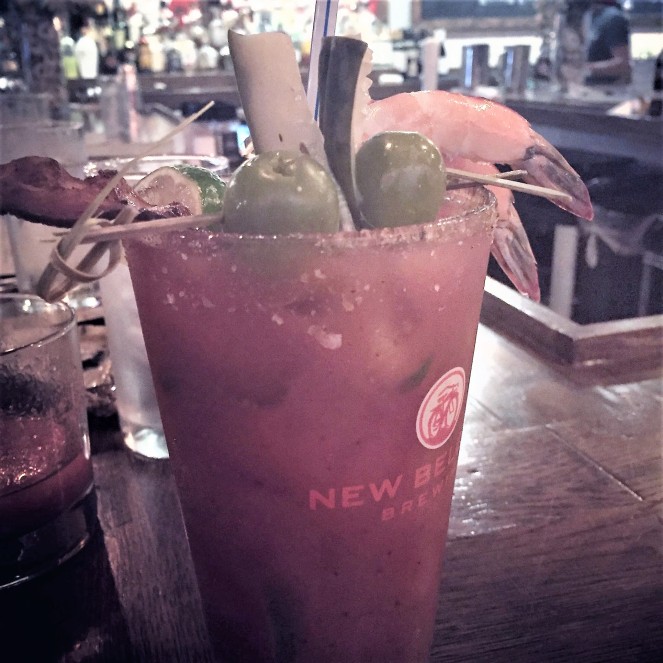 For my first course, I chose the half dozen oysters on the half shell.  These were small and perfect, briny and fresh!  My preference for oysters are smaller, and not those huge ones that lop over the cracker. These were served with a tart mignonette, but I still had to have my cocktail sauce.  Perfect. 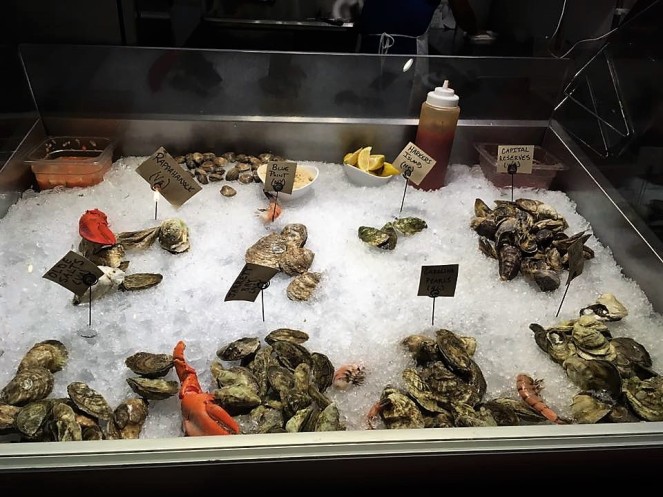 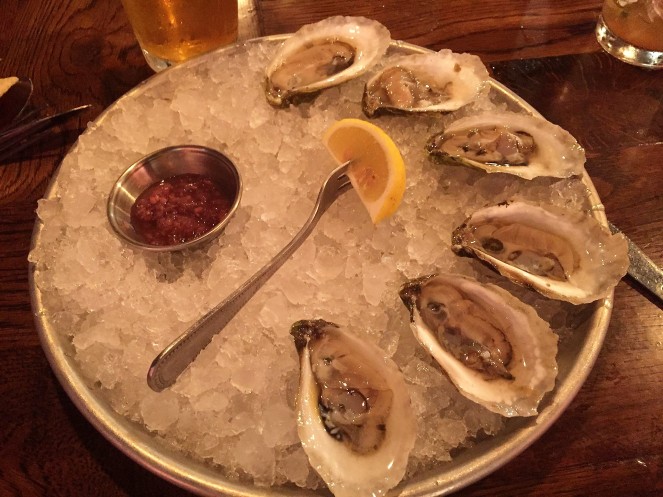 Other second courses that my friends got but I didn’t taste: Kale Salad and Seafood Gumbo.  All were pronounced delicious. 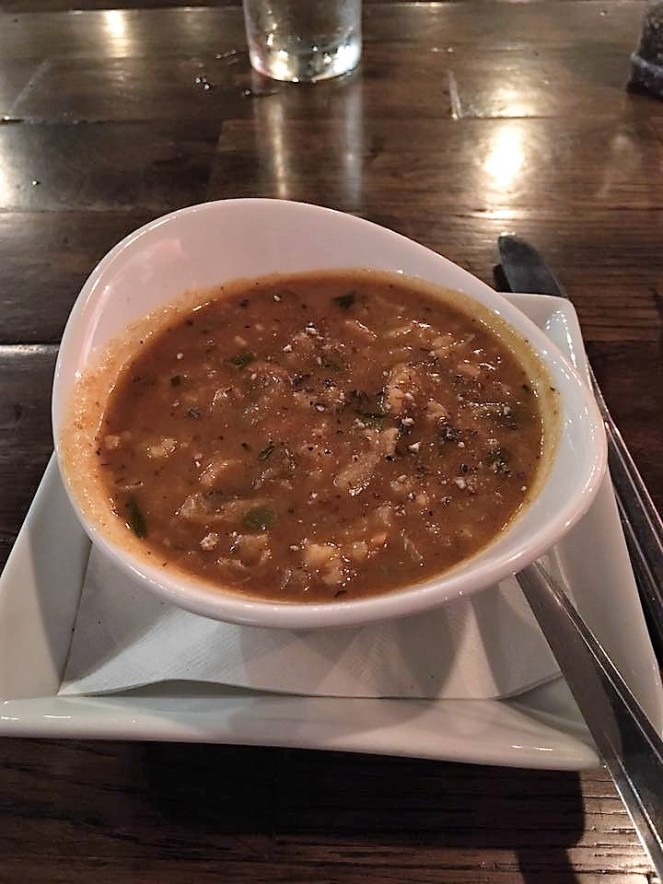 We had a limited choice of main dishes, of course, for restaurant week.  All were outstanding, though.  I chose the Seafood Risotto.  It was topped with Tiger Shrimp and Scallops and had spinach studding the risotto.  This was the best risotto I’ve ever had…at a raw bar! 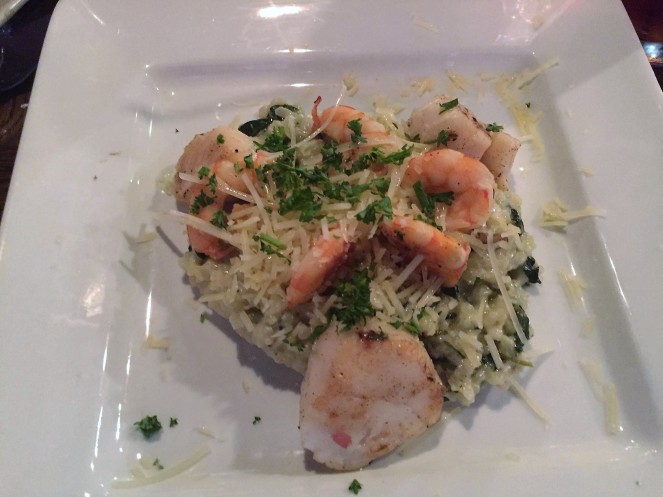 This one was the catch of the day, chargrilled.  It was swordfish, served with their grit cake and sautéed greens.  It was delicious. 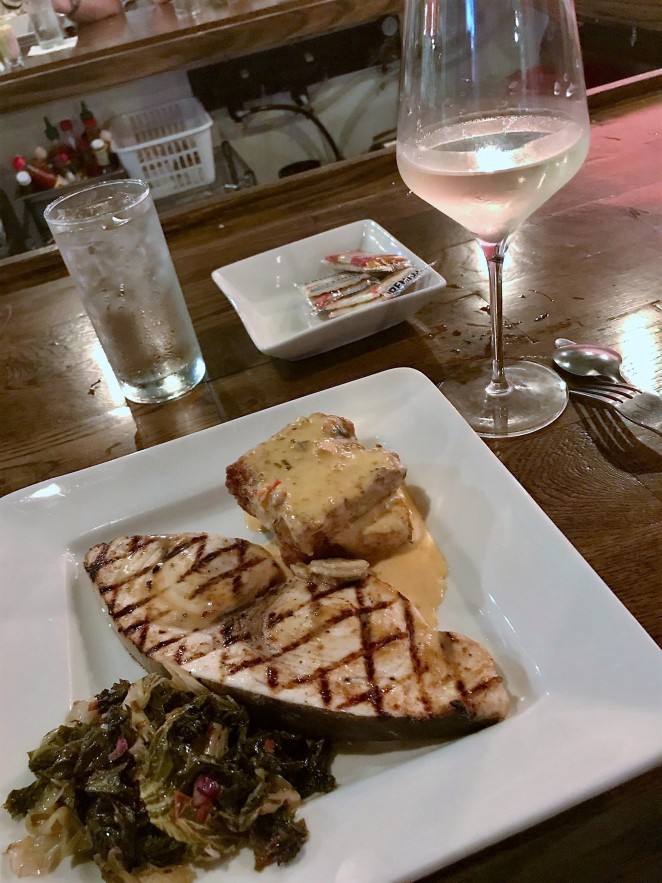 The Queen’s feast came with dessert, or I don’t think we’d have indulged.  We were so full!  I chose the Key Lime Pie.  I took one bite at the restaurant and it was so tangy and sweet that my cheeks puckered!  I took the rest home, and might have had it for breakfast.  The crust was homemade and it was really delicious.  The restaurant was warm, as I mentioned, and it was very melty there.  Once I had it in the fridge, it firmed right back up and was perfect. 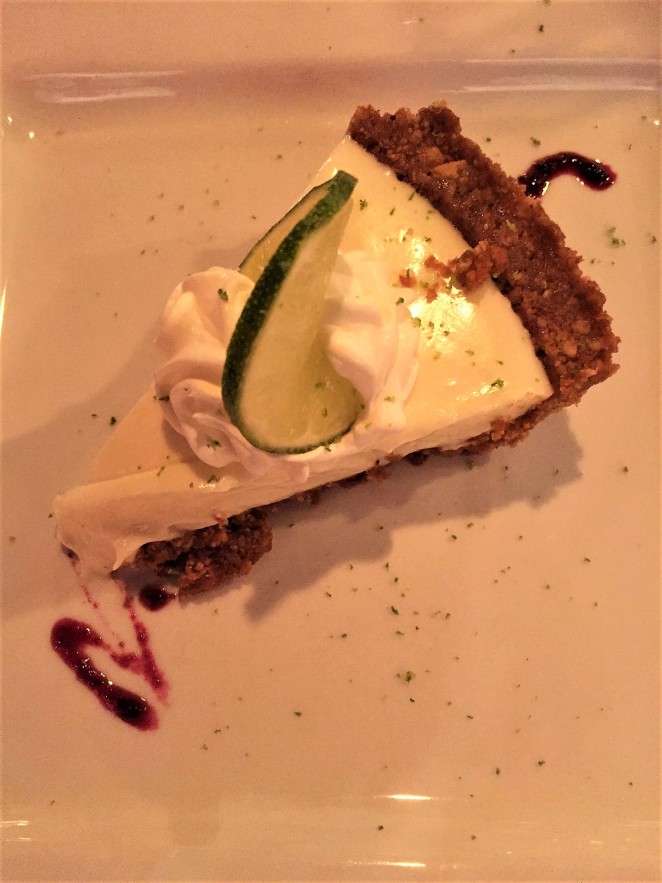 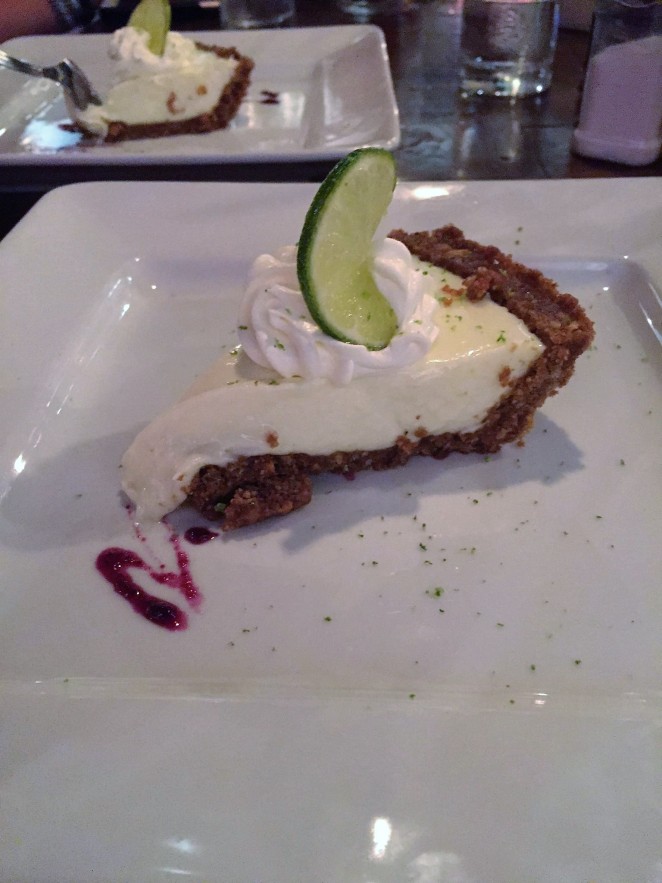 Kathy and Sienna got the Bananas Foster.  They both said it was delicious.  I could smell the liquor on them, though.  Totally didn’t burn off..they didn’t seem to mind. 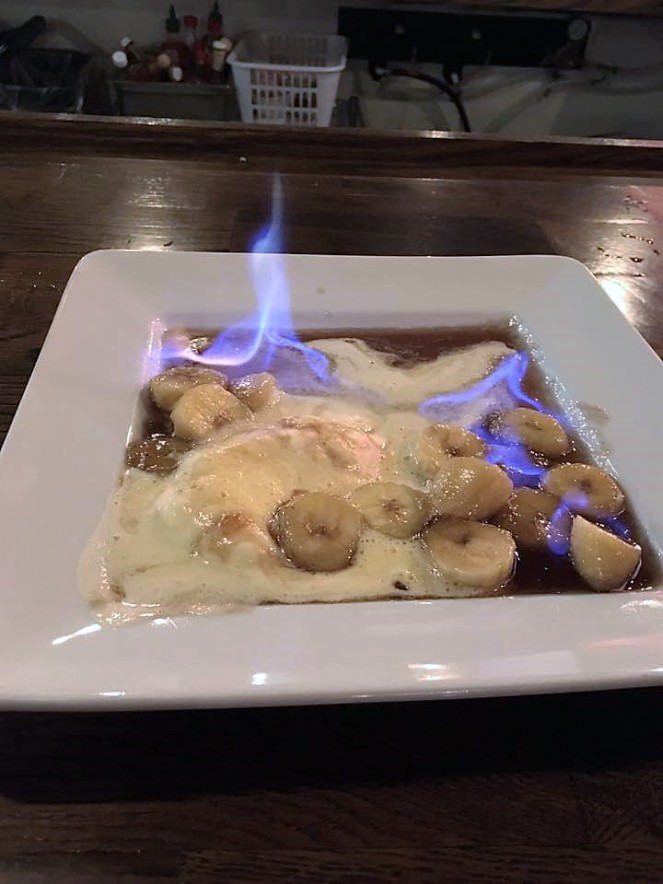 Wrap up: This new discovery is a game changer for me.  I crave fresh seafood, prepared in other ways besides frying.  This is a perfect addition to the Hickory restaurant scene.  They execute every part of their craft perfectly.  Crank that A/C down to 72 and you’ve got a fan for life 😉

Fourk was the last stop on our Girl Nosh Tour.  We had a crazy time getting there: a flat tire while traveling at 75 mph down the interstate and an hour late for our reservation.  Poor Kim waited for us at the bar 😦  But we made it and it was well worth the trouble.

Mad props to the staff.  They held our reservation for an hour and were very gracious when we finally arrived, not at all snarky.  I’ve been to other places where they’ll wait 15 minutes and give your reservation away, regardless of the circumstance, so this was a pleasant surprise, and certainly helped in turning the disastrous night around.  We sat down, breathed a sigh of relief and took a moment to look around.  The decor is the industrial/farm chic that is so popular right now.  It is very pleasant and current.  The servers are trained well and are kind, make excellent suggestions and are completely attentive to all needs.  The best service I’ve had in a very long time. But the food…that’s what makes this the perfect dining excursion. 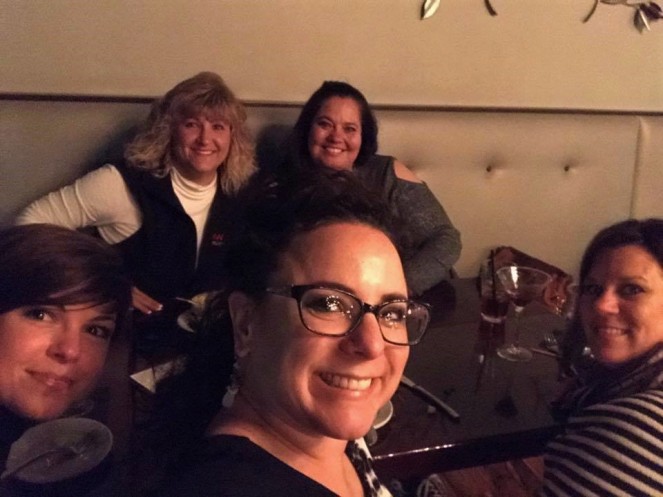 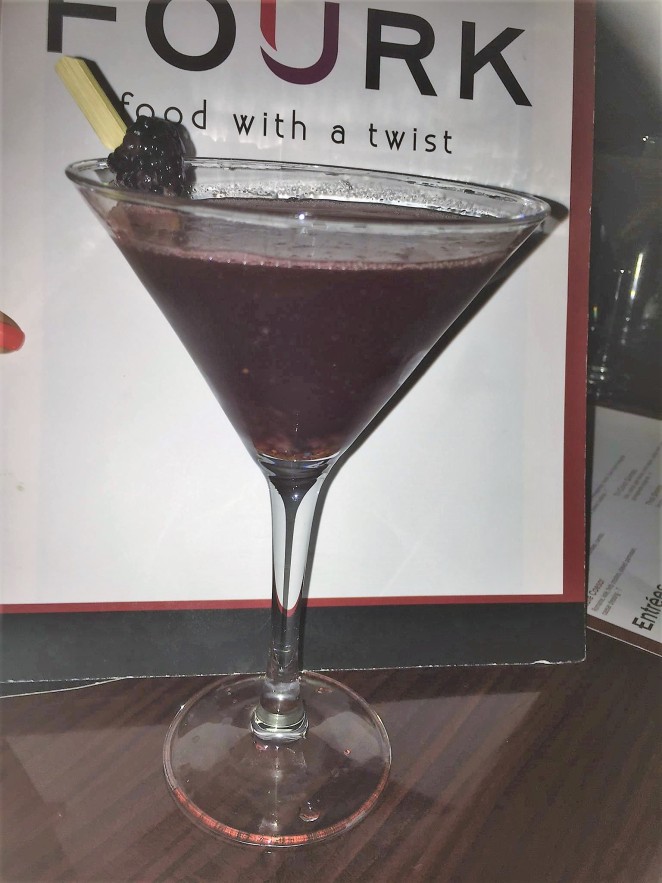 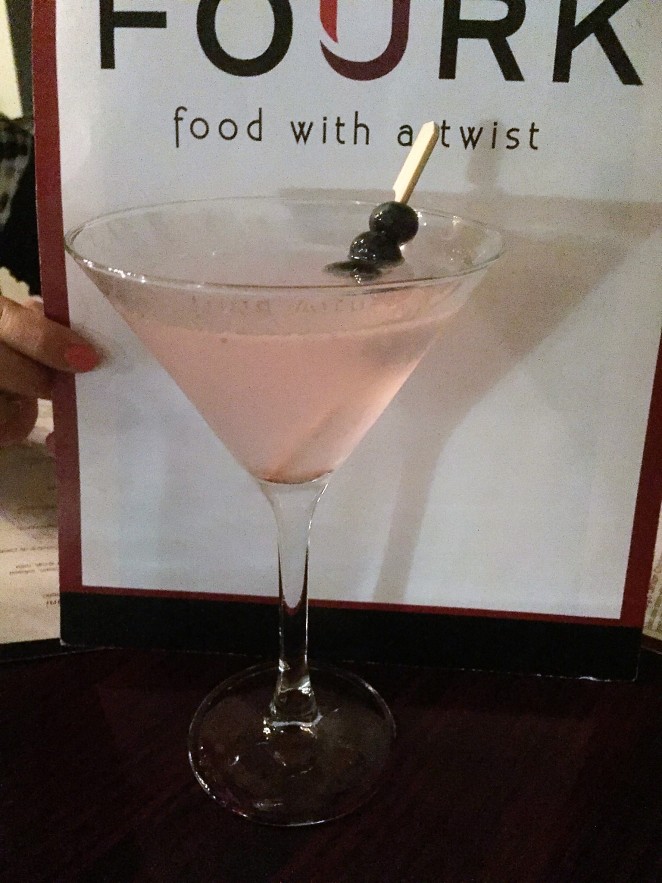 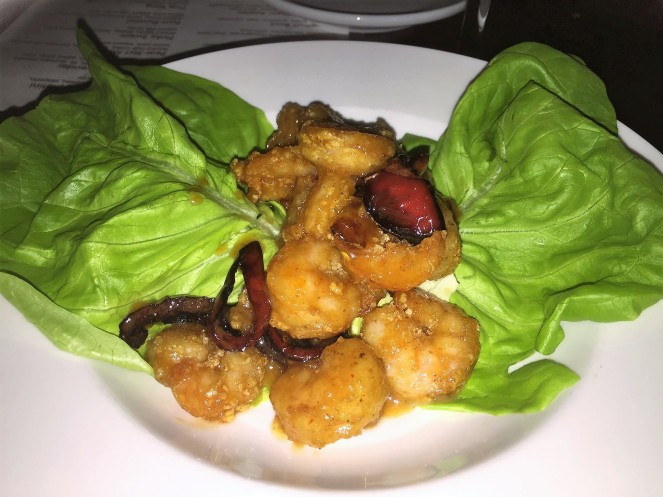 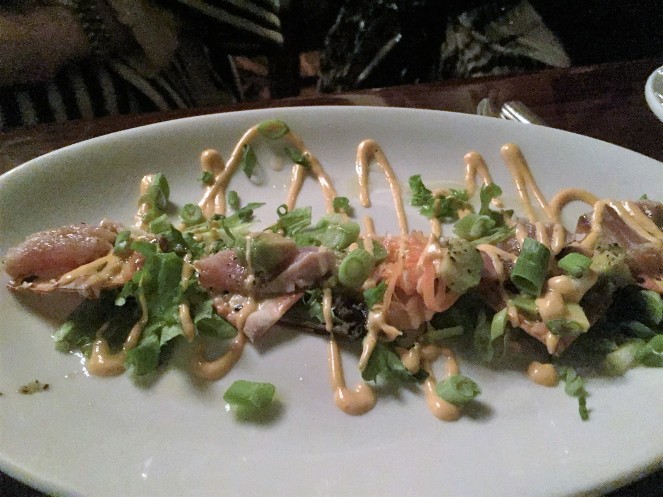 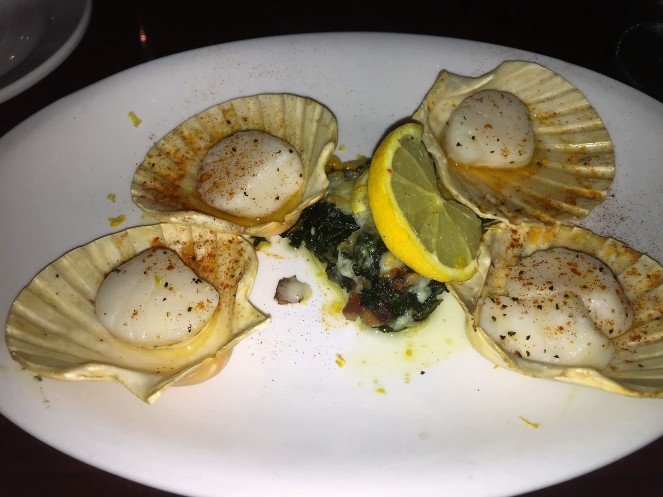 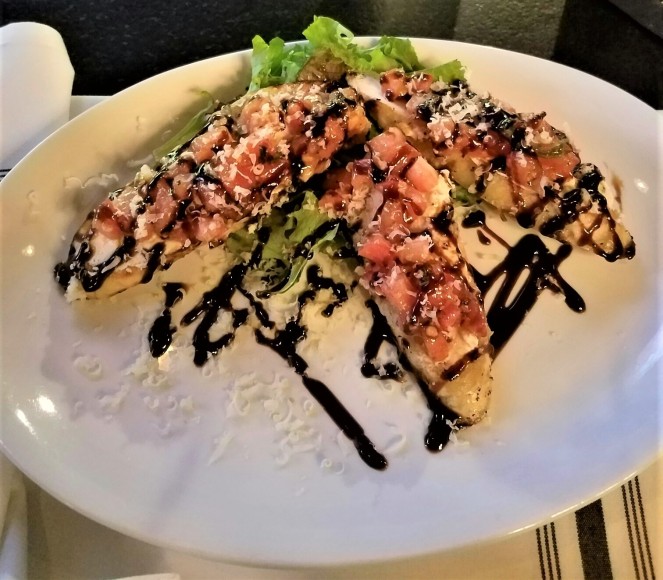 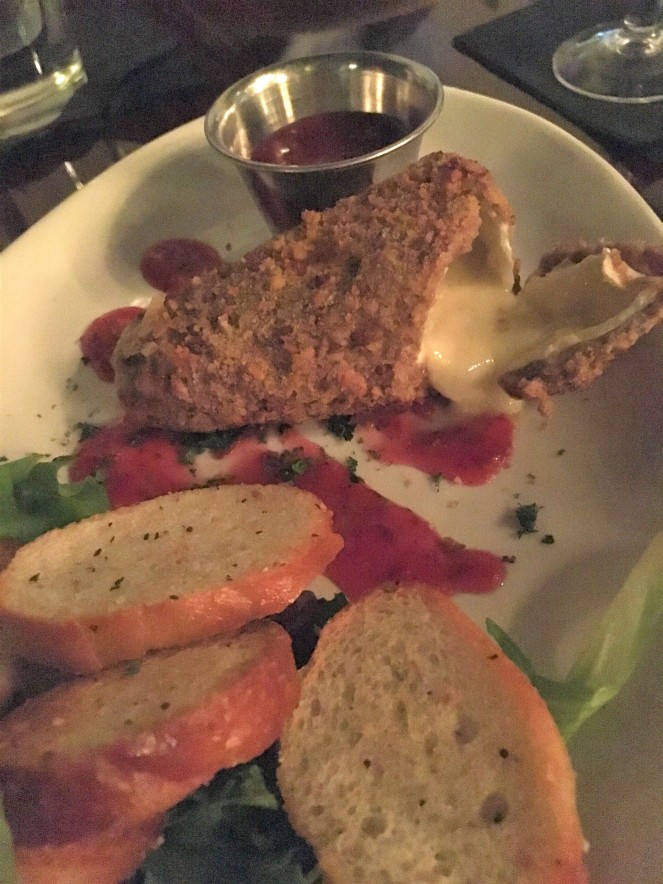 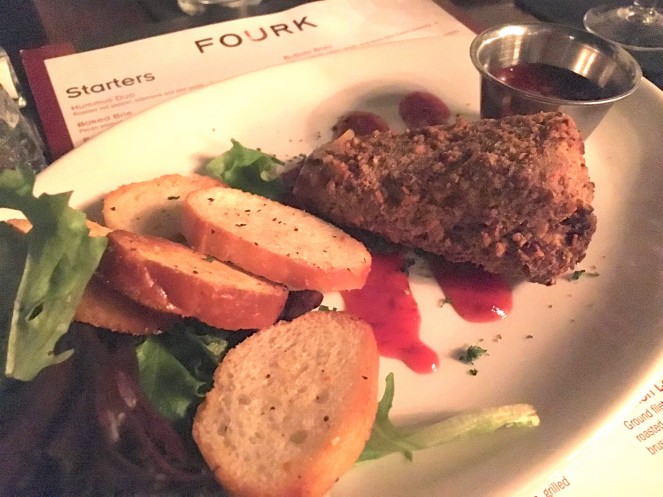 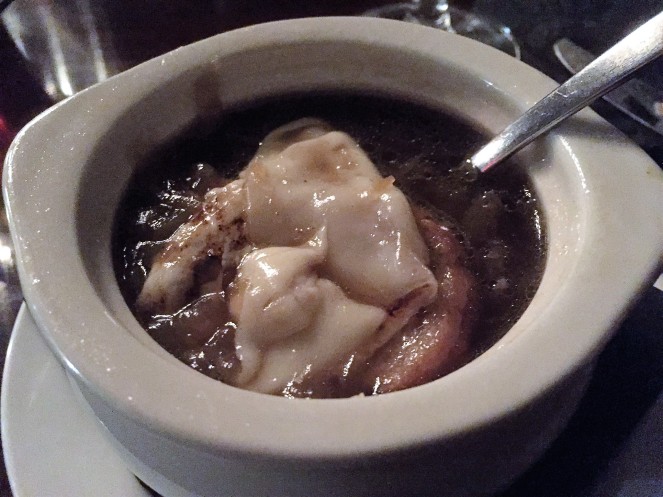 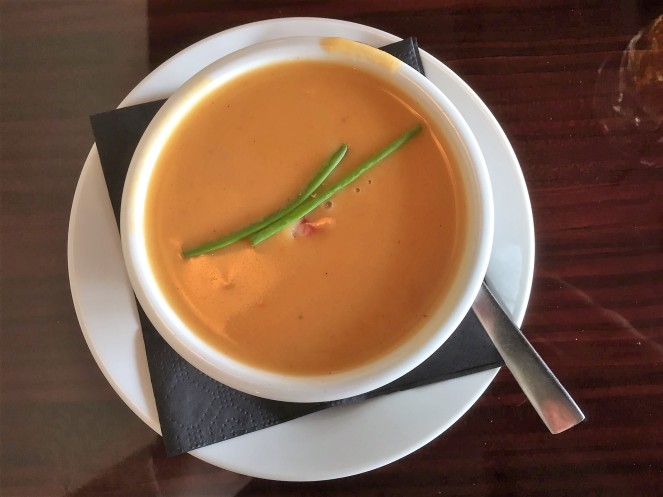 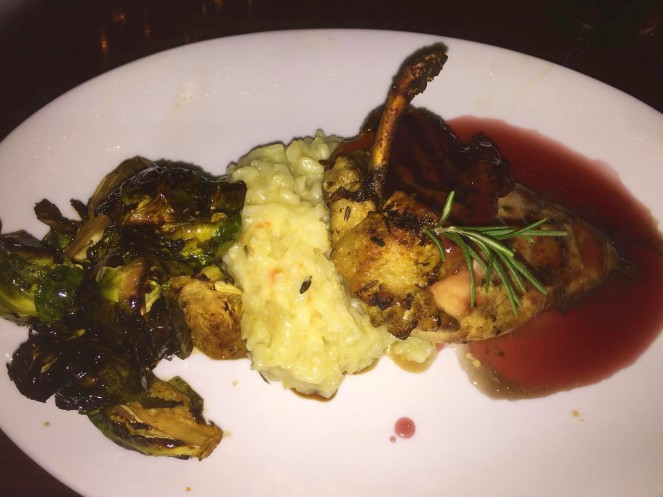 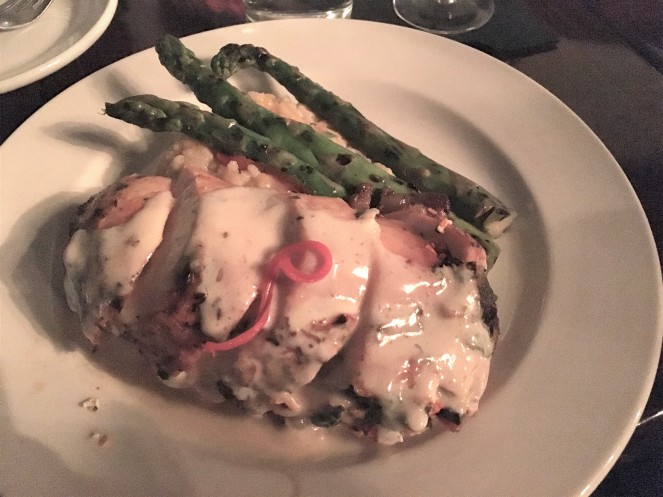 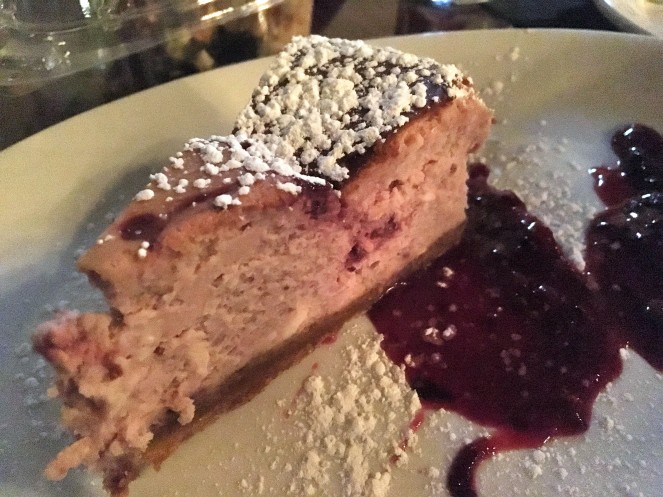 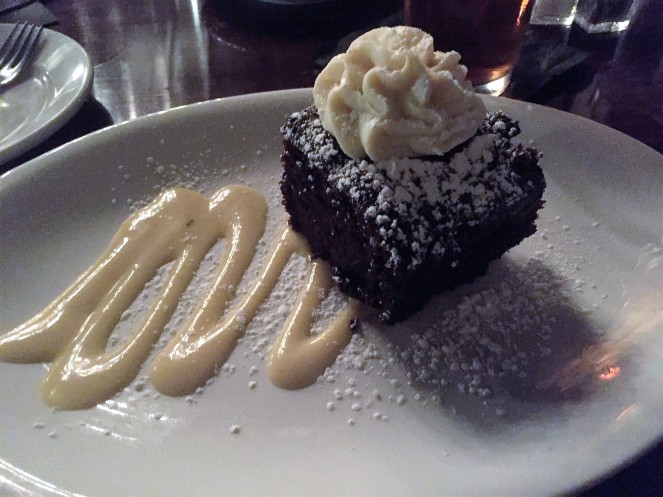 So let’s talk about the food.  We each try to order different things so we can taste each other’s to form a really broad and enlightened opinion of a place.  Yeah, that’s the ticket.  The appetizers came out quickly and were so good we couldn’t wait for our food.  The scallops were cooked perfectly, but the best thing about that dish was the spinach mix served as a garnish.  So flavorful!  A surprise was the tuna and avocado. I’m not a big fan of raw fish, but this was a nice balance with the spiced crust on the seared tuna, the acidic sauce and the cool, creamy avocado made it a really outstanding dish.  The Thai shrimp were crispy with a spicy sweet sauce. The brie was a different presentation, being breaded and baked.  Buttery brie spread on bread slices, who wouldn’t love that?  Kim had to have her appetizer while she waited on us to fix our flat and get to her, so we didn’t get to sample the bruschetta, but she pronounced it the best she’d ever had, citing the balsamic drizzle as the element that tipped it over the edge.

I’ve heard it said that a simple soup is the true test of a cook’s abilities.  I’ve come to believe that.   The best soup I’ve ever made was simmered all day long, and that’s what these taste like.  Made with love, expertly.  We tried three this night.  The French onion Soup was very deeply flavored with beef stock and simmered onions.  The cheese atop the brioche is just icing on the cake.  It was a really good soup.  We also tried the butternut squash soup, I didn’t take a taste, so can’t personally comment but Megan said it was really good.  The winner of the night was the lobster bisque; it was velvety and packed a punch of flavor.  Also, seasoned perfectly.  I still think about that soup.

The main dishes were all just a fabulous as we’d hoped.  I have to say that I might have enjoyed the garnish more than the protein.  My charred brussels sprouts were a real treat.  Roasting them that way gives them such a depth of flavor.  My chicken was the airline chicken, which is where the breast is boneless but still has the drummette attached.  They then cleaned the bone so it looks fancy.  I appreciate the effort.  It was delicious!

If I had one (tiny) complaint about the experience it is dessert.  I had the small chocolate cake and it was dry and underwhelming.  I was disappointed.  My friends enjoyed the cheesecake and faired a bit better, but we all agreed next time we’d skip.  Upon questioning the waitress we learned that someone else made the desserts for them, so likely that is the problem.

Don’t let that deter you.  Go!  Lunch or dinner, both are great and very comfortable.  I can’t wait to get back.

This place gets rave reviews from the locals, so perhaps we visited on an off night?  I’m not sure, but I didn’t see enough redeeming qualities in what we had or the atmosphere to go back to give it a second chance.

We began our meal with the soup of the day: French Onion Soup.  Ours arrived cold and we sent it back.  When it came back, the cheese was melted and it was warm, but it was flavorless.  No amount of salt helped, so we sent it back to the kitchen. 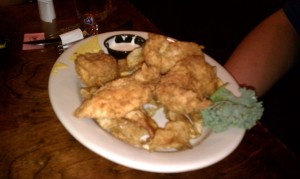 My son had the chicken tender plate.  They were homemade, not frozen, but lacked any sort of seasoning at all.  My teenage son scarfed them anyway. 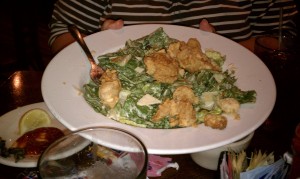 Lucky me got the worst dish of the night.  The Brutus Caesar salad with fried oysters and big ole anchovies.  Now, I know a Caesar salad has anchovies in the dressing.  That doesn’t freak me out.  However, when I inadvertently put what I thought was a mushroom in my mouth, I thought I’d gag.  It tasted like fishy dirt.  I attempted to pick them all out, but a few remained to spike random bites until I finally gave up.  I then tried eating the oysters on top, but they were so huge and unwieldy, I couldn’t make it through those either.  I left the restaurant starved. 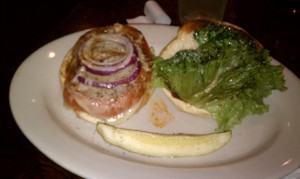 Dustin got the Tomato Grill which was basically a tomato sandwich.  Supposedly the tomatoes were blackened, but not really.  You’ll notice the wilted lettuce on the sandwich?  Anyway, my husband did eat it because, hey, tomato sandwich.  Would he get it again?  No.

The best dish of the night was this: 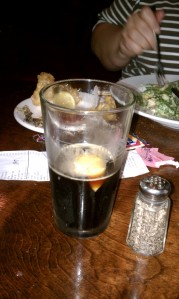 Which is ok, since it is a tap room.

You want to know where the best pizza is in Hickory? It’s at Tony’s, in a little strip mall near Target. It stays wrapped up, so you know it is good. We like New York style pizza, thin and bendy. This pizza is perfect for that, with a crispy crust perfect for crunching.

Another awesome fact about Tony’s is that they sell pizza by the slice, just like in NYC! I always go with the fam, so we just get a whole pie, but you know, the option’s there. I can’t really speak on any of the other items on the menu, because I never stray from the pizza. Never.